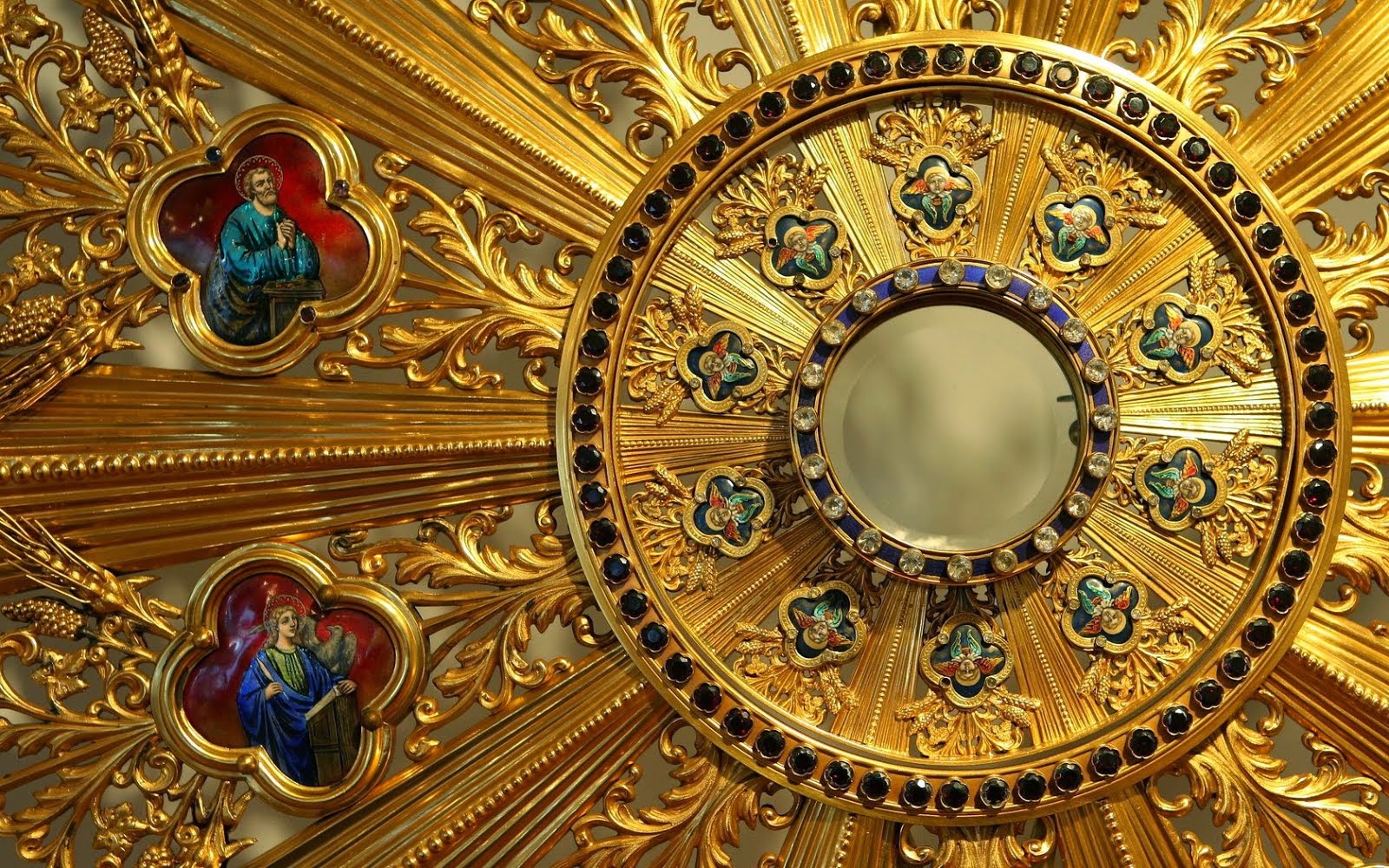 – Facebook/Eucharistic Adoration Society for Synod on the Family 2015
From the National Catholic Register, 29 Jan. 2015

ROME — Possibly not since the Second Vatican Council has the Church faced such a crucial gathering of prelates as the upcoming synod on the family.

Issues central to the life of the Church and society will be discussed at the meeting in October, particularly concerning marriage, and Pope Francis has strongly urged the lay faithful to pray it proceeds according to the Lord’s will.

For this reason, two laywomen living in Rome have founded the Eucharistic Adoration Society for the Synod on the Family 2015.

Christine McCarthy, the author of a book of prayers and meditations for Eucharistic adoration, entitled I the Lord Am With You Always, and journalist and writer Diane Montagna are inviting clergy, religious and the faithful worldwide to take part in a Eucharistic adoration novena for the intentions of the Pope, the synod fathers and the Church.

The novena is to take place on the first Thursday of each month, for nine consecutive months, beginning on Feb. 5. It will conclude on Oct. 1, the feast of St. Thérèse of Lisieux, three days before the opening of the synod.

Already, faithful in Africa, the Americas, Asia, Australia and Europe have committed themselves to the initiative. Archbishop Charles Palmer-Buckle of Accra, Ghana, has said the Eucharistic Adoration Novena will be observed in all the parishes of his archdiocese on February 5th.

Participants are directed to a dedicated website and Facebook page and are invited to organize adoration on those days according to their own possibilities and circumstances. They are also invited to follow the novena’s Facebook page and use the Twitter handle @Adore4Synod2015 and hashtag #adore4synod to spread details of their participation.

‘One of the Best Preparations’
Cardinal Wilfred Napier, one of the four council presidents of the synod, has endorsed the novena, describing the initiative as “one of the best preparations the Church could make for the second session of the synod on the family.”

The archbishop of Durban, South Africa, said in a Dec. 26 interview with the Register that, through prayers for the synod, he feels “certain that the Holy Spirit will enlighten and guide the Church along the way of truth, fidelity and authenticity.”

At his weekly general audience on Dec. 10, Pope Francis asked that the faithful “accompany this synodal path with prayer until the next synod.”

“May the Lord illuminate us, enable us to move toward the maturity of what we, as a synod, must say to all the Churches. Your prayer is very important for this,” he said.

On the issue of marriage, the Pope said last April that it is the “icon of God’s love for us” and must be always protected.

“Indeed, God, too, is communion: The three Persons of the Father, the Son and the Holy Spirit have always lived and live forever in perfect unity,” he explained. “And this is the mystery of marriage: God makes married couples into one existence. The Bible uses a strong term: It says one ‘flesh’ only, so intimate is the union between man and woman in marriage. … Married life is beautiful and must be protected always.”

Opportunity for Laypeople
McCarthy, from Sydney, Australia, hopes that as many of the faithful as possible will organize a novena.

“I feel that, as laypeople, we have an obligation to pray to ensure marriage and the family are protected at a time when they are constantly under attack,” she said. “This synod offers a valuable opportunity to ensure this happens and answers a direct request from the Holy Father.”

Some groups or individuals may miss the first day of the novena on Feb. 5, but the organizers say there’s no cause for concern.

“We hope that the number of priests, religious, laity and children who respond to the novena will continue to grow as the synod approaches,” said Montagna, who has previous experience organizing perpetual adoration.

“The important thing is to participate,” added Montagna, who hails from Pennsylvania. “We, therefore, encourage the faithful throughout the world to put social media at the service of the Lord, to spread the word and to unite in worldwide Eucharistic adoration for the synod on the family. As the saints tell us, Eucharistic adoration is one of the most powerful forms of prayer.”

Patronage
St. Thérèse of the Child Jesus was chosen as patroness not only because the final day of the novena falls on her feast day, Oct. 1, but also because she “shows us how one soul adoring the Lord in the Blessed Sacrament can change the world,” said Montagna.

The 19th-century doctor of the Church is also seen as an appropriate patroness because her parents, who were beatified in October 2008, are considered “a shining example” of marriage and family life, Montagna added. “They show us that marriage and family life lived according to God’s plan is a vocation and call to holiness — and a source of joy.”

Regular updates on the initiative, themes for each month and pertinent quotes on adoration and the Eucharist will be posted on Facebook. Faithful interested in the initiative are invited to “like” the page and share it on social media.

* As this date falls on Holy Thursday, the faithful are asked simply to follow the normal rites of the Church for that day, which includes Eucharistic adoration after the Mass of the Lord’s Supper.